Beston looks set to be TCDSU’s next President, with 61% of the vote

Laura Beston is likely to be the next Trinity College Dublin Students’ Union (TCDSU) President, according Trinity News’ annual election poll. Meanwhile, Muireann Kane, the sole candidate for Communications and Marketing Officer, is set to narrowly overcome the re-open nominations (RON) campaign lobbied against her.

The Trinity News poll was conducted online and in person between Wednesday, February 20 and Friday, February 22. A total of 1,044 polls were counted.

Much has been made of the lack of female representation in the upper echelons of Trinity College Dublin Students’ Union (TCDSU) in recent years, a trend Laura Beston looks set to buck as she is likely to be the next President of the union, beating her competitor Daire Hennessy by a healthy margin. According to the polling, 61% of decided respondents will select Beston as their first choice for the position, against Hennessy’s 33% first preference vote among decided students. Although there’s still students to be won over – more than a quarter of students polled hadn’t yet made up their mind – it’s unlikely Hennessy will manage to overturn such a decisive margin. Beston also performs better among women, with 66% giving her their first preference, in comparison to 54% of men. 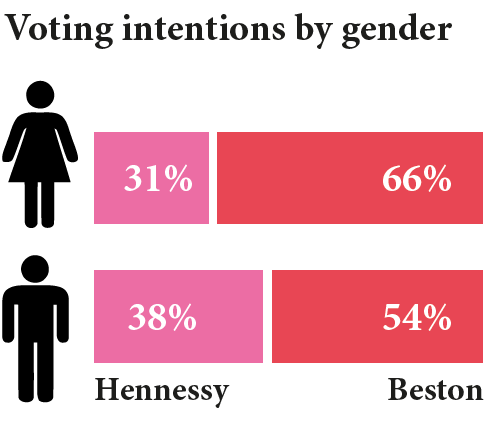 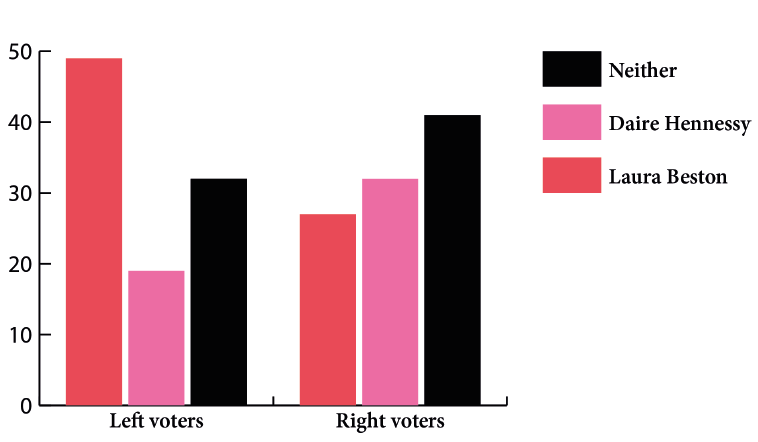 The divergence between this year’s candidates is striking in a number of respects. Beston’s manifesto points are split almost evenly between local and national issues. The former do not depart much from candidates in previous years’ races, including aims to improve student spaces and the “empowerment” of students. The latter, however, are considerably more specialised and include issues such as trans healthcare, a hope to “bring about a more inclusive SU for students through a dedication to providing platforms for minorities and campaigning for equity across the board”.

Hennessy’s manifesto, while touching sparsely on more national issues such as that of housing, is heavily focused on local issues such as accessibility and engagement. He states that he wants to bring the SU “back to basics”. His campaign is more clearly aimed at the supposed “average student” than Beston’s, showing a desire to reach beyond the typical cohort invested in the actions of the Students’ Union. Hennessy also dedicates a lot of manifesto space to the issue of supporting students on placement.

Education has emerged as the closest race of this election period as Niamh McCay pulls ahead with 52% of first preference votes in the poll, while Sally Anne McCarthy has garnered 43% of the vote. In a race characterised by little controversy within an increasingly contentious election period, both candidates have projected a confident and competent image at the hustings.

McCarthy is the staunch favourite among EMS students, securing 68% of their votes in the polls. Male students show little preference between the candidates, whereas women are notably more likely to vote for McCay than McCarthy.

McCarthy’s main proposals include late night office hours, the introduction of a students’ choice award for academic staff, and redesigning class rep training. Throughout hustings, McCarthy has reiterated her proposition to redesign class rep training as a step towards solving several of the academic issues students face. In her manifesto, McCarthy gives considerable attention to the internal workings of the union. If elected, McCay hopes to update room booking information to include accessibility details, to create a module review database with information on modules, and to produce a “How To” guide answering commonly-asked student questions. She has particularly emphasised her desire to improve the quality of teaching materials provided to students, which would involve asking teaching staff to sign up to an optional agreement to provide students with the best possible quality teaching materials.

Aisling Leen, uncontested in her bid for election to the position of Welfare Officer, is currently polling at an agreeable 81% following a relatively uncontroversial week of campaigning, save for a number of minor blips. Leen’s campaign is largely based around building on the work of incumbent officer James Cunningham, as well as several more original, somewhat niche ideas.

Most strikingly similar to Cunningham is the intention expressed in her manifesto to develop “a concrete policy for dealing with cases of sexual assault in College”. According to the former’s most recent Council Officer report, he is also looking at the introduction of “more concrete policy” in this area. A more distinct manifesto point is that relating to abortion provision. Leen intends to establish “a relationship with the Irish Family Planning Association and/or the Well Woman Centre to facilitate students to access abortion”. She also aims to ensure that “S2S peer supporters are prepared to provide hospital accompaniment to those who require it”. She has noted in hustings that S2S, as well as the Counselling Service, have been receptive and supportive of her ideas, but that the Health Centre has been less so.

Muireann Kane, the sole candidate in the race for the position of Communications and Marketing Officer, has narrowly defeated the re-open nominations (RON) option in Trinity News’ poll. The narrow majority of 56% follows a rocky start in the candidate’s first week of campaigning.

Kane initially struggled at the second hustings of the campaign, particularly in response to a question criticising the accessibility of her manifesto. It was put to the candidate that her manifesto may be inaccessible to visually impaired students, to which she replied that she herself was of the “glasses persuasion”, which garnered criticism among Council-goers.

The Offaly native also faced early backlash after it was reported that she had decided not to use Facebook as a means of campaigning. She instead planned to focus on using her personal Instagram account as her main medium of communication, citing the greater reach on the latter as the reason for her decision. Kane has since launched a campaign Facebook page. On Wednesday evening, a separate Facebook page surfaced, launching a campaign urging students to opt for a RON vote in the race.

Despite the rocky start, Kane responded defiantly to the criticisms. At Media Hustings on Thursday evening, Kane described the RON campaign as a “thinly veiled attack”. At the same hustings, Kane highlighted that she had created a second version of her manifesto following the issues with fonts in the first. She said that she had been in contact with a number of visually impaired students, seeking input on the new font and colour. In addition, Kane decided to backtrack on her earlier resistance to campaign on Facebook, stating in a video interview with Trinity News that she would “absolutely” set up a Facebook page for the sake of people who “did feel more comfortable” with same. 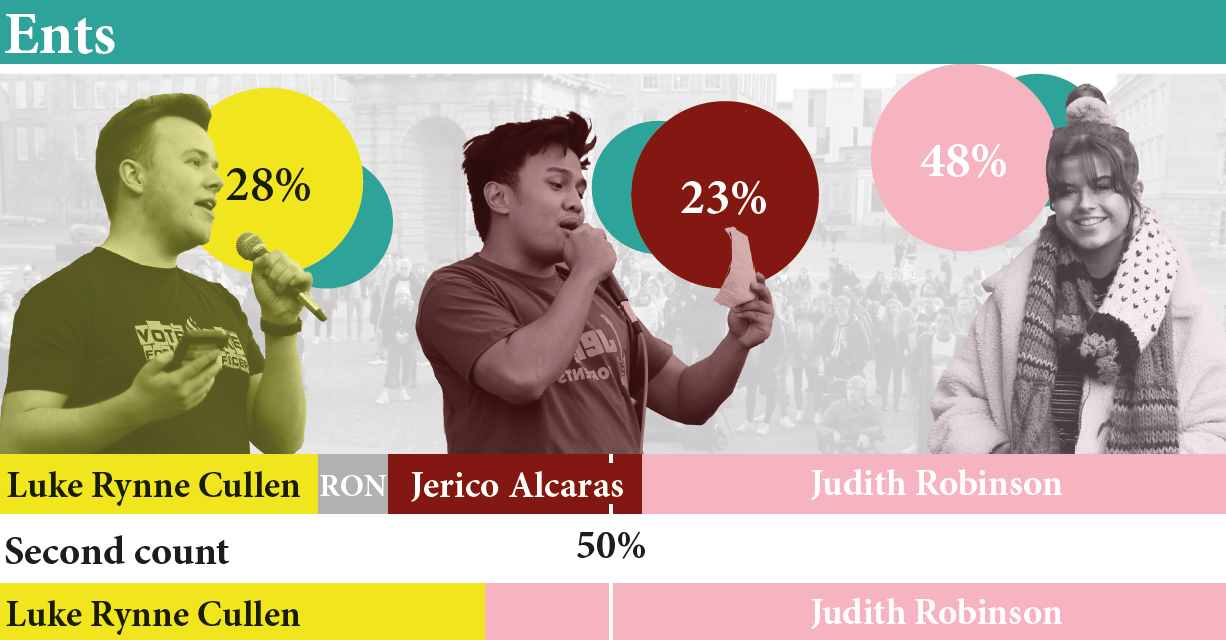 TCDSU sees three candidates compete in the race for Ents Officer this year, making it the most contested race of the elections. According to the Trinity News poll, Judith Robinson, a third year Music and Drama student, is on track to be elected Ents Officer, with just over 57% of the vote on the second count. This is over 15% more than her closest competitor, and fourth year English and History student, Luke Rynne Cullen, at 42% at the second count. It also sees third place candidate, fifth year Computer Science student, Jerico Alcaras, eliminated after the first count. RON received considerably fewer votes than any of the candidates, with a total of 3% failing to select a candidate. 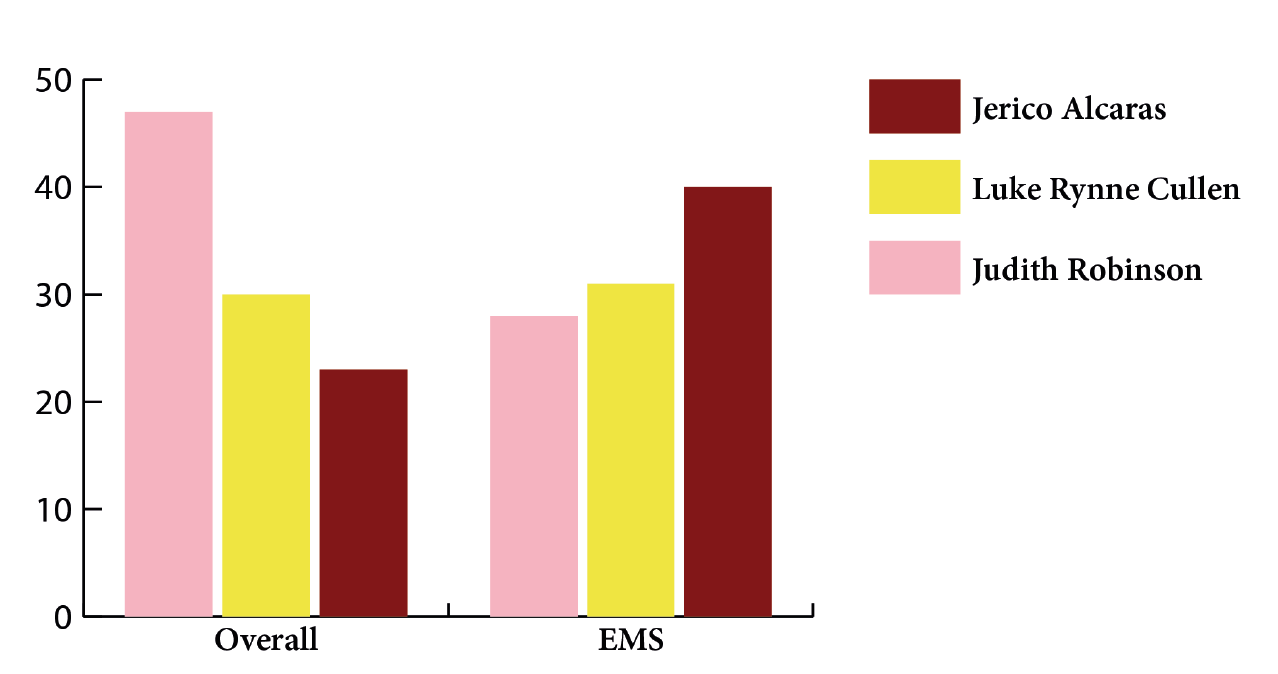 However, these statistics have been ascertained from only 61% of students who have made a decision on their preferred candidate. Almost one third of students have not made up their mind, at 30%, while 8% of students acknowledged that they have no intention of voting in the election. Notably, Alcaras saw the highest support amongst the Engineering, Maths, and Science (EMS) faculty. The unsuccessful candidate sees over 40% of these students support him, followed by Rynne Cullen and Robinson on 31% and 28% respectively.

In his bid to become the next University Times’ Editor, Donal MacNamee is set to receive the highest number of first preference votes out of any candidate, winning with a comfortable margin of 81%. The option of re-opening nominations received 19% of the vote.

MacNamee, a fourth year English and History student, is the sole candidate in the race for the position of University Times Editor and is the paper’s current Deputy Editor. In a fairly run-of-the-mill manifesto, his points have centred around increasing the paper’s presence on campus, its coverage of Trinity events, and holding College accountable. Another aspect of his manifesto that MacNamee has spoken about at length during hustings has been his plans to create a Community Engagement team in order for the paper to play a bigger part in Trinity, discussing the idea of organising monthly public meetings to offer students the chance to “offer feedback and suggestions”. None of these proposals signal a massive change in the way in which the paper currently functions, but in an interesting turn from recent years, MacNamee wishes to make UT more accountable to students.

The question of funding is perhaps the single most significant issue facing UT at the moment – with the newspaper recording a deficit in excess of €16,000, excluding the wage and accommodation costs for the Editor – and as such, it is interesting to note that funding is the sixth and final point on MacNamee’s manifesto. MacNamee has repeated several times at last week’s hustings, and outlined in his manifesto, the paper’s awareness of the issue, but has not offered any substantial methods to mitigate the significant deficit. So far during the campaign, MacNamee has outlined his plans to increase revenue within the paper with a notable reluctance to discuss the possibility of cutting costs. He has discussed his idea to work with companies in order to secure corporate sponsorship and has floated the possibility of introducing a headline sponsor, similar to Law Soc or the Phil. In addition to corporate sponsorship, MacNamee has stated that he wants to add a “Contribute” button to the paper’s website, which he hopes readers of the paper will donate via to provide an additional source of funding.

MacNamee looks set for a clear victory, winning by a margin of almost 82%. This is in contrast to last year, when current Editor, Eleanor O’Mahony, was elected with 58.5% of first preference votes, with joke candidate Michael McDermott running against her. The magnitude of MacNamee’s predicted victory is indicative of the strong campaign he has led to date. His performances at last week’s three hustings were well-received, in particular at Monday afternoon’s Dining Hall Hustings, where the large size of his campaign group was evident.

College has stated that they plan to put a cap on the number of students who will be allowed to defer places in the next academic...

Gisèle Scanlon has been elected as the president of the Graduate Students’ Union (GSU), attracting 85% of votes cast by postgraduate...

Erasmus to proceed for Trinity students on voluntary basis

Erasmus exchanges are to proceed for Trinity students in Michaelmas term on a voluntary basis, College has informed students on...

Most Irish universities have announced that they are planning on limiting access for students to college campuses to a few days a week,...

On the second day of voting for the Graduate Students’ Union (GSU) sabbatical officers, 141 votes have been counted, bringing the past...