Children are fairly impressionable creatures. They also have an admirable lack of inhibition  when it comes to asking questions about the apparently mundane. Thus, they are perfect candidates for anyone hoping to teach science, if not for the fact that they’ll only listen if what you’re telling them is fun, simple and colourful. Trinity’s resident professor of Immunology, Luke O’Neill, only recently took the jump from the insular world of academic publishing to writing for the general public with his book, Humanology, and has already released his newest project: The Great Irish Science Book. Aimed at introducing the overlooked world of Irish science to the next generation, O’Neill chats about the process behind the book, how he hopes it will impact its bright-eyed readers and the state of science in the public eye.

Book writing isn’t something you do on a whim, it’s obviously a big commitment particularly for someone working full-time. O’Neill claimed the motivation for his project was to “avoid watching Game of Thrones”. He goes on to say: “ but more seriously, I like writing a lot. When I was asked to do this book for children I saw it as a great opportunity to spread the word on how great science is, and to highlight Ireland’s contribution to science.”

“There hasn’t been a science book for children written by an Irish scientist.”

With any work that’s meant to teach you something, there’s a delicate balance to be both entertaining and educational. Labelling something as scientific adds that extra burden of having every word jumping onto your page be able to withstand the scathing scrutiny of seventeen gold-certified experts in the field. Hence, academic papers usually throw entertainment out the window and embrace being sterile, dense and inaccessible. I asked him how he enjoyed writing for children and he admitted he was “a little cautious to begin with as I’d never done it before. It’s a different way of writing. I was greatly helped by Sheila Armstrong at Gill Books, who did great editing to make sure it was accessible.”

One of the highlights of the book is its spotlight on Irish science. O’Neill claims “there hasn’t been a science book for children written by an Irish scientist. It was great to feature [them] — they should be as famous as Saoirse Ronan. We’ve probably all heard of [Robert] Boyle, but it was great to highlight others, especially women scientists who had been written out of the history to some extent… like Ellen Hutchens, who was a plant scientist famous for her work on lichens and seaweeds, Kathleen Lonsdale, a famous chemist who worked out the 3D shapes of molecules like benzene and Maude Delap, who was the first to study jellyfish and could breed them in captivity. Also some scientists who are still alive, our own Dan Bradley is famous for analysing DNA to uncover the origins of Irish people and also how humans domesticated cattle, and William Campbell, who did Zoology in Trinity and went on to win the Nobel Prize in 2015 for his discovery of the anti-worm drug ivermectin, which has stopped millions of people from going blind in Africa.” I asked him about the stunning illustrations by Linda Fährlin, and what it’s like to work with an illustrator. O’Neill’s response was that it was “superb, this kind of book is sold as much on its illustrations as the text and Linda has done some remarkable and beautiful illustrations. It was great to see what she made of the text.”

The scientific community often comes under fire for poor public engagement. O’Neill’s opinion on how scientists should engage with the greater world around them was to “encourage all scientists to try, not all are suited to it which is ok too. It’s a skill that can be learnt and it’s great to see programmes for our undergrads to help them communicate effectively. The more scientists can engage with the public the better — the Science Gallery is a great example of that.”

“There are huge challenges coming down the track and in a democracy, people should make informed decisions.”

His forays into the written word are not finished yet. Currently, O’Neill is working on another book that will cover specific issues that people are discusssing where science and data can hopefully help — vaccines, climate change, men versus women, euthanasia and making drugs legal will all feature.

O’Neill hopes The Great irish Science Book will eventually produce some scientists of its own. “Even if they don’t become professional scientists, it is so important to inform people and make them scientifically literate, as there are huge challenges coming down the track and in a democracy, people should make informed decisions. I hope they will find [the book] interesting and fun — there are experiments they can do too which should make a mess of many a kitchen. I also hope that it will maybe change how they look at the world (using science) and make them part of the big adventure that is science.”

The Great Irish Science Book is published by Gill Books and available in stores now. 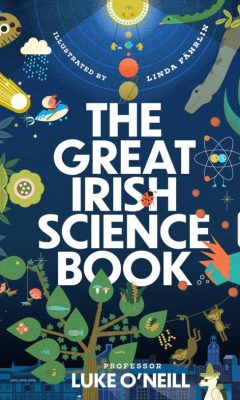 Enya O'Connell-Hussey is a Staff Videographer for Trinity News.

Established in 1687, Trinity’s Botanic Gardens have existed in one form or another through most of the College's history. The gardens...

Exercise is a crucial factor in cancer rehabilitation

For 21-year-old Shauntelle Tynan, exercise isn’t simply a task to pencil in as a New Year’s resolution or an excuse to search out...

The Coronavirus isn’t named after a beer or the band, but is likening to a crown from the latin corōna  a "garland worn on the head as...

How bats fight poverty in Mexico

What is there to like about bats? Not a lot, one would think, as fears of diseased, night-flying, hairy blood-drinkers come to mind. We...