Learning to pole dance in my bedroom: Interview with the Irish Pole Dancing Academy

Learning to pole dance without a pole may seem like an oxymoron, but founder and owner of the Irish Pole Dancing Academy, Arlene Caffrey, believes that within a matter of weeks anyone can learn the basics of pole dancing, even without the equipment one would think is required. Speaking to Trinity News over Zoom, Caffrey details how she has adapted her classes to an online format and encourages anyone looking for a cure to lockdown boredom to sign up to her Patreon: “Pole dancing is for everyone. I think people are surprised by how fun it can be. People get so caught up in their responsibilities, especially this year, it’s a great way to unwind.”

After graduating in 2009 from DIT with a degree in graphic design, Caffrey was faced with unemployment due to an ongoing raging recession: “throughout my last year of college, we were told to apply for visas so we could leave as soon as possible. Our professors told us there would be nothing left when we graduated.” Caffrey describes founding the academy as a “necessity”, noting that it was her way to find employment in a seemingly hopeless situation. Caffrey began pole dancing as a hobby in her first year of college, going on to win several competition titles. Caffrey had been a yoga enthusiast and references popular culture as a reason why she became intrigued in pole dancing as a hobby.

It’s so important for us as educators to acknowledge that pole dancing was invented by sex workers and women of colour. Even with the move to make pole dancing an Olympic sport, things like that are born out of erasure. Cultural appropriation is a massive issue within the activity

Although not a sex worker herself, Caffrey emphasises the need to find a balance between enjoying pole dancing as a hobby and paying tribute to the sex workers who paved the way for it to become so universally acceptable: “At the moment, pole dancing is very much a middle-class activity. The classes, equipment, and gear are not cheap. It’s so important for us as educators to acknowledge that pole dancing was invented by sex workers and women of colour. Even with the move to make pole dancing an Olympic sport, things like that are born out of erasure. Cultural appropriation is a massive issue within the activity.” Caffrey notes when she was initially learning how to pole dance, she faced a lot of discriminatory rhetoric about strippers from her teacher, explaining that they weren’t allowed to wear heels in class: “the marketing was very defensive and labelled pole dancing as purely fitness-oriented and nothing else. I’m happy to see a shift in recent years where studios are acknowledging the origins of pole dancing. It is linked to the sex and adult industry but we have a long way to go in terms of acceptance.” In her teaching methods, Caffrey uses the original names of moves such as the “stripper push up” in order to have open conversations about pole dancing as an activity.

Caffrey went on to detail the physical and mental benefits of pole dancing. Referring to her own transformation, she notes that she was: “quite underweight in college and definitely not a sporty person or involved in dance.” Caffrey points out that her strength and posture began to improve the more she trained, noting that: “at the time I was so surprised how accessible pole dancing was for someone who had no dance or sport background.” Caffrey explains that weight training or dance training are not required as a beginner: “we teach everything from the baseline. Everyone starts at the bottom even if they’re a gymnast or a dancer. If you have a background, great, but it’s not necessary.” According to Caffrey, pole dancing allows you to become more mobile, self-assured, and aware of how your body works. In terms of mental benefits, she points out that under normal circumstances the social aspect of attending the academy encourages people to come back: “we do showcases at the studio where students perform in front of each other which is always a highlight. To be able to choreograph, create and present your work is a huge benchmark in terms of self-confidence.” 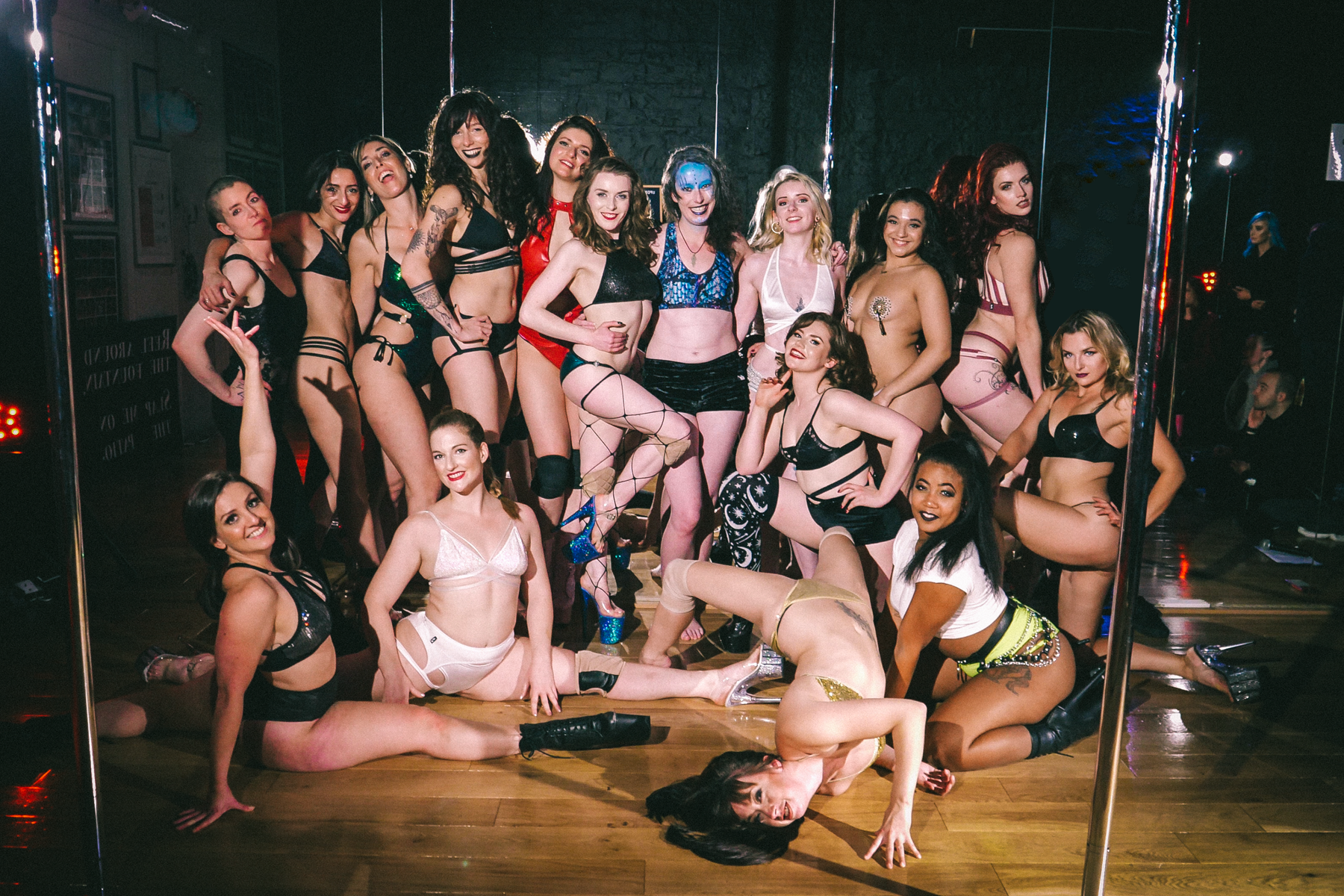 When asked about how Covid-19 has affected the academy, Caffrey mentions the struggle to attract clients throughout the first lockdown as many customers would enquire about when the studio would reopen instead of purchasing online classes: “it was very frustrating as a small business owner because if you don’t support businesses now, they won’t be around for when things do return to normal.” Caffrey goes on to talk about her goals for the next year, acknowledging that although survival of the academy is her priority, she would like to expand her business venture further: “I would love to open another studio but that depends on rent and everything else. Incorporating new types of classes that involve spirituality would be amazing. My goal with the studio is to build a temple to all things feminine and to encourage people to embrace and celebrate feminine energy, which has often been rejected in Ireland.”

Caffrey notes that within a month, you should be able to see improvements in your flexibility, posture, fitness and confidence levels, expressing that training twice to three times a week is ideal.

After investigating and investing some time to take several of the tutorials on the Irish Pole Dancing Academy Patreon, I can confidently say that I will be a recurring subscriber. Due to me not owning a pole at home, I purchased the “floor work fundamentals” tier (from  €20 per month) and am delighted to report that it has been worth every cent. With hundreds of videos to choose from, you can build up and design your own floorwork choreography from the comfort of your own home. If you’re a bit more adventurous or want to invest in a pole for your home, the Irish Pole Dance Academy offers both off and on-pole tutorials for  €30 per month. Caffrey notes that within a month of attending either course, you should be able to see improvements in your flexibility, posture, fitness, and confidence levels, expressing that training twice to three times a week is ideal. When it comes to time in the studio, Caffrey estimates that it takes around 3 to 6 months to be able to: “go upside down” on the pole which is often seen as a milestone for progress but in her own opinion: “the best pole dancers are the ones who look like they’re having fun.”

Eva O'Beirne is the Deputy Life Editor of Trinity News and a Junior Sophister History student.

My first-hand experience with transgender healthcare in Ireland

There are many issues with the Irish healthcare system which each contend for public attention, such as the need for secular free...

In the heat of the summer while we plan our trips away and pack our bags, there are decisions that need to be made about what books to take...

Round-up: A guide to Pride in the city

As we swiftly approach the halfway point of 2022, the month of June is dedicated to celebrating pride. The capital hasn't seen the streets...

What is personal is not always political

A year and a half ago my life was turned upside down by the discovery that I was pregnant. I was nine weeks along, and in acute agony. This...