What do Trinity Fashion Society look for in campus couture?

Historically, there are no other Irish colleges that come to mind that can even compare to the fashion standards that Trinity has set. Walking around the Arts Building is like a fashion show in itself. Recently, Trinity Fashion Society (Fashion Soc) has started an Instagram series entitled Campus Couture, which aims to showcase the most fashionable students spotted walking around College. In order to gain further perspective, I spoke with Fashion Soc members Ryan Byrne and Juno McCloskey, the society’s social media ambassadors, who are responsible for the creation of the popular ongoing series.

When discussing what inspired them to start up this online phenomenon at the beginning of Michaelmas Term last September, Byrne revealed to Trinity News that it was evident to Fashion Soc that students at Trinity have a very elevated sense of style. He noticed that “walking into Trinity is like walking into Paris Fashion Week” — a statement that many of us can agree with as we scramble to piece together an outfit before class.

The series was started to encourage students to wear whatever they want into college; McCloskey stated that “we wanted something that would show everyone, including people that aren’t necessarily members of the fashion society, how confident and unique people are on campus.” Weekly, the pair snap pictures of individuals on campus and then choose the best ten styles to feature on the society’s Instagram page (@fashionsoctcd).

While scouting potential fashion features, McCloskey recounted that they don’t look for anything in particular but instead focus on “anyone who obviously uses their clothes and accessories as a means to express themselves. We look for people that stand out from the crowd and make brave fashion decisions.” Bryne believes that “there’s nothing more exciting than seeing people have fun with their outfits, and it seems since starting Campus Couture the outfits keep getting better.”

“People often stereotype the ‘typical Arts Building student’, but McCloskey focuses on the individuality that is constantly found.”

People often stereotype the “typical Arts Building student”, but McCloskey focuses on the individuality that is constantly found: “There are definitely stereotypical items of clothing that people associate with Trinity students, for example leather jackets, tote bags and Docs. If you think about it though, these are great items that are stereotypical because they are all cool, even if a lot of people are wearing them.” For Fashion Soc, the Arts Building is a hotspot to be spotted and snapped. Byrne shared that “it seems this is where 90% of all pictures featured on campus couture are taken!” If you’re wanting to see yourself on the Instagram page, McCloskey advises that “confidence and authenticity are essential.”

Since beginning the online series the society have noticed an increase in their Instagram engagement. The Campus Couture posts gain around 1000 likes every post, while on average their other posts would reach 200-300. As well as this, the page gains continuous followers because of the popularity of Campus Couture; Byrne even commented that there have been over 700 new accounts following the Fashion Soc page since the series began. This surge in following has also increased the popularity of events held by the society to the point that they are regularly sold out!

I asked both Byrne and McCloskey for their favourite outfits that have featured on Campus Couture so far. 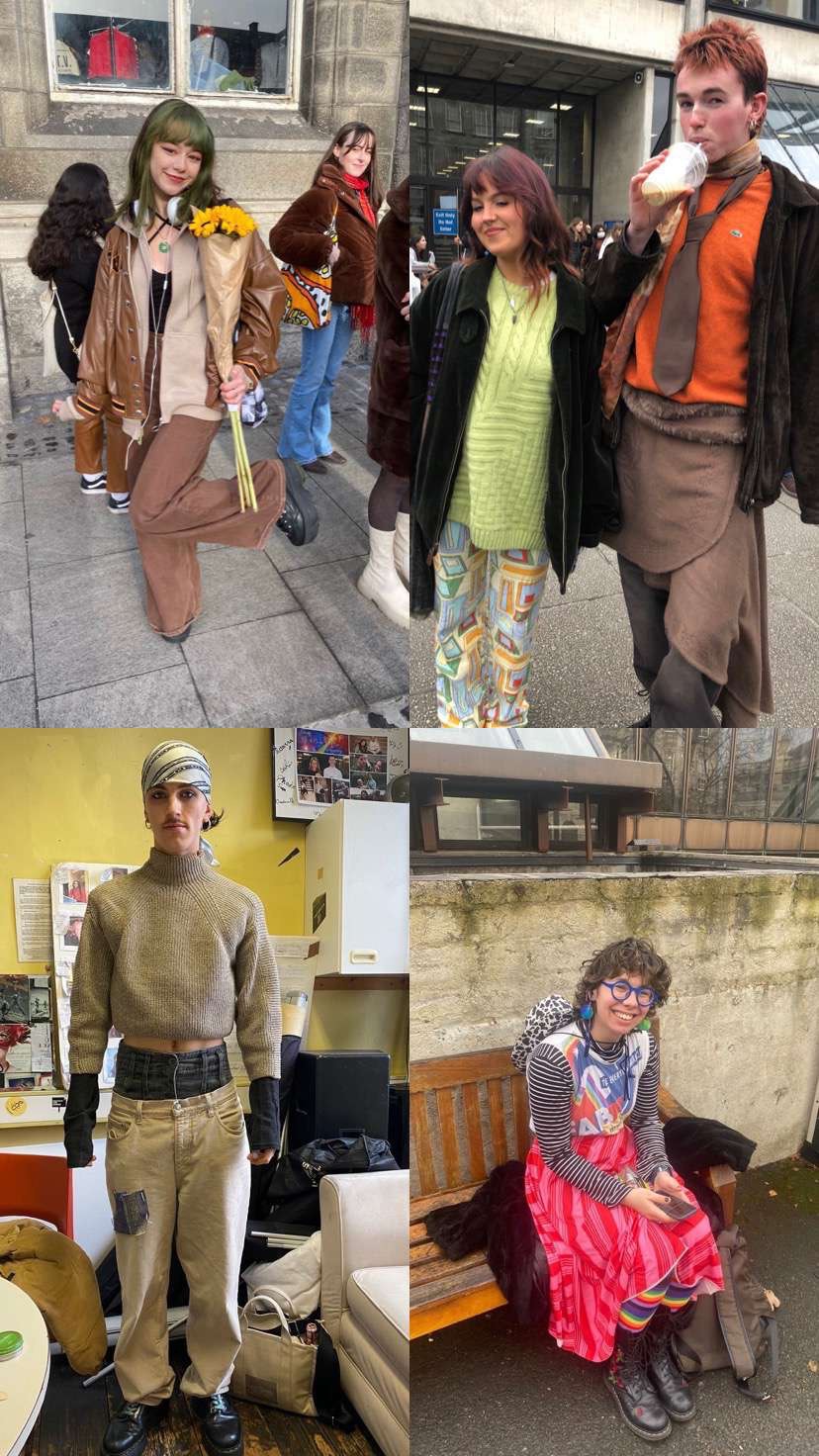 Talking about the outfits above, Byrne feels that these images “demonstrate Trinity’s sense of style as a whole, representing a nice equilibrium of style.” McCloskey then commented: “I think it is really interesting that although these people have completely different styles, they are all wearing a staple pair of black boots. I think black boots are one of the most important items someone can own and I just thought it was really cool how they all had this in common.”

“…one minute we see mixing and matching with every colour of the rainbow and next we see monotone fits of blacks and beiges.”

Trinity offers a wide variety in style and Byrne stated that “one minute we see mixing and matching with every colour of the rainbow and next we see monotone fits of blacks and beiges.” So, next time you’re getting ready for college and you feel hesitant about wearing a daring piece, just do it! As McCloskey said, “it’s so important to not take it too seriously, and to just have fun and be creative. Fashion should be used as a tool to express who you are and what you want people to know about you.”

Following the triumphant return of Trinity Musical Theatre’s (TMT) annual show, an outstanding production of Guys and Dolls, some of...

The AGM — No you should not worry if you don’t know what that means! AGM stands for Annual General Meeting. Companies, schools, clubs,...

The fields of Science, Technology, Engineering and Mathematics, known collectively as STEM, are often considered supreme areas of study,...

Hiking culture has seemed to have moved up on the social scale in recent years. After being locked up indoors for so long, it was the...

This year’s Trinity Arts Festival (TAF) week began on the day devoted to romance. Running from 14-16 February, the society of tote bags...