Roe v Wade: F*ck Morality, this is a war on women

Progress is fragile, painful, and most importantly, impermanent. This has been an impossible week for anyone who can get pregnant. The overturning of the Roe v Wade ruling by the US Supreme Court has felt like a massive step back in the struggle for gender equality. The ruling, which provided the legal basis for abortion in all fifty states, has been in place since 1973. This legal basis was eliminated by the votes of five justices, only one of whom is a woman. The original Roe v Wade ruling passed by seven votes to two. Eight in ten Americans did not want Roe v Wade to be overturned. It is remarkable to think that with one vote, guaranteed abortion access for every American has been undone. This is not an issue of morality; fuck morality, this is a war on women.

It’s difficult to put into words how I and so many other women felt when this news broke. Both when the initial draft ruling was released over a month ago, and when the vote took place last week. The feeling of hopelessness was palpable. I was on the train when the news broke last weekend. Myself and my three friends immediately began muttering things like “I’m not even surprised”. We, of course, flocked to social media to see the reactions in real-time. Politicians, celebrities and ordinary people alike all shared their outrage at the ruling. Many more people were simply too overwhelmed to say anything. Infographic after infographic appeared on our feeds, shining a spotlight on all the pain that this ruling has caused and will cause. We are witnesses to the fact that progress is never irreversible, and we are all so tired.

Such a dark part of Irish society reared its head during that campaign that when the vote actually happened, it was very difficult to rejoice in the victory. 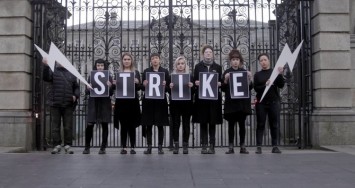 I was seventeen when the Repeal the 8th referendum took place. I had a year left until I was able to vote. I had to sit and watch people vote on what was appropriate for me to do with my own body. It was completely out of my hands. I remember being at work the day of the vote, sick to my stomach, worrying about the outcome. When it was announced that we had repealed the 8th Amendment, I was ecstatic, and then, within a few days, I felt almost nothing. Sure, there was some relief, but for the most part, a numbness had set in. It had been such a long and tiring campaign. Seeing repealers campaign day after day, met with a barrage of bad-faith misinformation and fear-mongering from the No side. Such a dark part of Irish society reared its head during that campaign that when the vote actually happened, it was very difficult to rejoice in the victory. Sure, the Yes vote gave women the right to abortion in Ireland, but it also showcased the fact that there are thousands upon thousands of Irish people who genuinely don’t believe women should have fundamental, inalienable and often life-saving rights.

I suppose that’s why when Roe v Wade was officially overturned, my friends and I were unsurprised, deflated, melancholic and almost shamefully relieved that it wasn’t happening in Ireland. Yes, I can still get an abortion in the Republic of Ireland if I want to, but it’s far from easy. Most women have no idea how to go about it and have no clue if it costs money or how to make an appointment. Many people have no idea who they can go to when they are faced with this choice. Even more are scared to go to anyone for fear they’ll be judged, exposed or ridiculed. When going through one of the most difficult choices a woman can make, she should not have to worry if the society around her will offer her the ability to make that choice.

Women shouldn’t have to live their lives anticipating the next stripping of our rights. Abortion rights are worth fighting for, but we are so tired of feeling like we’re fighting a losing battle. I am so angry and so scared for all of the women living in those red states in the US. I am so angry for all of the women living in Northern Ireland who still don’t have access to abortion services, and who are so constantly forgotten in this conversation in the Republic.

In some states in America, right now, the penalty for having an abortion is greater than the penalty for rape. If a person wants to abort their rapist’s child, they will suffer a heavier punishment than the person who raped them.

I am so tired of the total hypocrisy of men who will never be in the position of having to consider this choice, who will never fear for their lives if they get pregnant, who will never know the pain of praying over a pregnancy test for one line instead of two. Our rights are not your debate. Our choice is not your debate. Our bodies are not a vehicle for your fucked up morality. Our healthcare should never be yours to dictate. And yet it is. Over and over again we have to politely ask these people for our rights and they wonder why we’re so angry.

It is easy to view the Roe v Wade decision as irrelevant for Ireland. However, right now on this island, people cannot access abortion services. While there is outrage online over the US Supreme Court’s decision, 200 women from the Republic had to travel for abortion services last year. Abortion services in Northern Ireland have been described as almost non-existent since it was decriminalised in 2019. We have to demand more. The stalling, rolling back and erosion of abortion rights is on our doorstep. 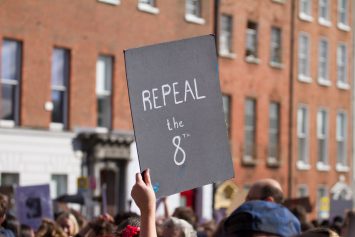 I was walking through Dublin yesterday, and I saw that there is a “Rally for Life” happening in the near future. Roe v Wade was overturned less than a week ago, and this is already happening. This is not a coincidence. The Pro-Life movement in Ireland has been spurred on as a result of this ruling. Seeing these posters back up in the city centre is not only disheartening – it’s frankly terrifying. I am terrified of losing the reproductive rights I have. The idea that the progress we’ve made here could be undone like in the US is terrifying, it’s intolerable, it’s absolutely fundamentally wrong. But crucially, it’s possible.

I am left with so many questions every time this debate rears its head, not least why my fundamental rights are even being debated. Those who are anti-choice claim they are pro-life. I think we should be asking them who’s life they think they are protecting. It’s not anyone who can bear a child. It’s not children whose suffering seems to be disregarded as soon as they leave the womb. It’s not women in abusive relationships who get pregnant. It’s not women who’ve been victims of rape who get pregnant. It’s not women who simply don’t want to bear children. Pretty ironic that being “pro-life” involves completely dehumanising women into walking, talking incubators. At what point do the lives of women stop mattering? Is it as soon as we leave the womb?

This is a war on women but it is also a war on our trans friends, our non-binary friends, on anyone and everyone who can bear a child. At what point do our lives stop mattering to the pro-lifers?

My body, my fucking choice. I am so tired of saying it, we all are, but we owe it to every person on this island, on this planet, who can bear a child, who has a uterus, to keep fighting for these rights, no matter how constantly disillusioning it is. This is a war on women but it is also a war on our trans friends, our non-binary friends, on anyone and everyone who can bear a child. At what point do our lives stop mattering to the pro-lifers?

My body, my fucking choice. Say it again and again and again. America has suffered a huge setback, many other countries are yet to make any progress on this, we have people still suffering on this island from lack of access to reproductive healthcare. Now is the time to strengthen our resolve. These rights are inalienable, are so fundamental and as we’ve seen in the last week, they are hard-won and harder kept. Most importantly, it is absolutely none of anyone’s business what I or any other person does with their body.

My Body My Choice.

The Irish Government is being irresponsible in its handling of monkeypox

Within one minute of scrolling through the topic of ‘monkeypox’ on Twitter this morning, I greeted with deeply misleading headlines...

Working in Halls this summer was harder than it needed to be: conditions need to change

The author of this piece requested that it be published anonymously. These are not the opinions of Trinity News. Working in Trinity Hall...

The government’s Leaving Cert reform is directionless and ill-prepared

After decades of discussion and an equally long list of suggestions as to how it might be improved, the Leaving Certificate (Leaving Cert)...

Sunday Longread: Student union engagement is facing a crisis, the UCD election results only prove that

On April 1, four out of five officer races for the University College Dublin Students’ Union (UCDSU) elections resulted in a vote to...