Trinity has the right formula

Formula Trinity talks to Trinity News about their success at Silverstone.

To all motorsport fanatics, the tarmac at Silverstone is hallowed ground. Since the inception of Formula 1 in 1950, it has served as a legendary race track hosting megastars of the sport. The British Grand Prix is the pinnacle of the global motorsport calendar, but Silverstone is a place of pilgrimage all year round. It was here, with the track still hot from Sunday’s extraordinary racing battles, that FSUK (Formula Student UK) descended onto the National Paddock.

Formula Student is the world’s largest and most established university motorsport competition, run by the Institution of Mechanical Engineers. In its 24th year, the event hosted 130 university teams from 30 countries as they raced to compete during the week-long competition in July. Backed by the motorsport industry’s leading engineers and academics, it aims to inspire students to compete with a single-seater vehicle.

Formula Trinity, the College’s first motorsport organisation, was founded in 2017 to design and create a fully functional racecar. The team is interdisciplinary; Engineering, Computer Science, Business and Arts students all come together to help realise this dream. After securing an impressive second place in Formula Student Concept Class in 2019, Formula Trinity decided to make a post-Covid return and compete as first-time participants in Class 1 and FS-AI. The unmarked path to building the team’s very first car was steep. 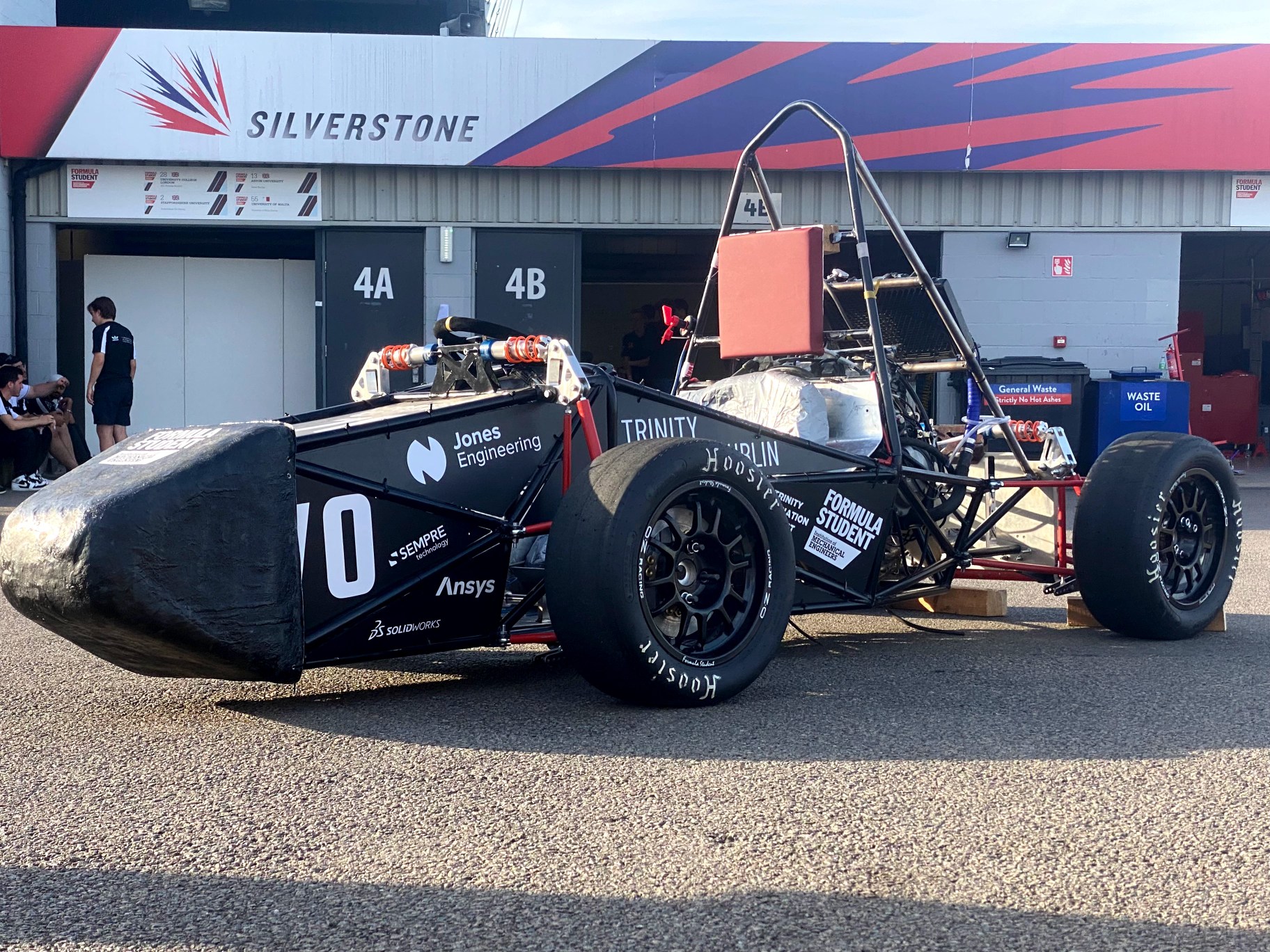 “We’ve had a lot of setbacks in the run-up to getting this car onto a track.” says Lucy Daly, Formula Trinity’s Chief Operating Officer. “Currently, our biggest challenge is resources. We are sponsor funded and we don’t have a fixed workshop, meaning we need to get a bit more creative than other teams when it comes to manufacturing.”

Adam Holmes, the Chassis Structural Lead, also mentioned the logistics of building the car were more complex than anticipated: “Something we’ve learned the hard way this year is that you can’t just go off and do what other teams are doing because it doesn’t work well when you don’t have the time to do those designs.”

Despite these issues, what keeps the team motivated is their dedication to their roots. Lucy Daly’s introduction to the team echoes an enthusiasm for motorsport shared across the fifty-person strong team: “In TY I was a part of an F1 in Schools team and really enjoyed the experience, so in my first year of college when I saw Trinity had a Formula Student team, I decided to join.”

Keith Ahern, Powertrain Lead, discovered the team through Trinity’s open day: “I found that Formula Trinity was taking what Engineering students were learning in the lecture theatre and applying it directly to an interesting, practical project of a formula style car.”

Walking through the Copse tunnel to the garage, underneath the track where Lewis Hamilton and Charles Leclerc went wheel-to-wheel in a high-speed battle just three days earlier in the Formula 1 British Grand Prix, sparked a vigour within the team. Late nights and early mornings under a hot sun brought a feeling of camaraderie between the university teams. UCDFS, our Irish counterparts, finished 11th overall in the Concept Class.

“I think my favourite part of FSUK was how supportive and helpful other teams were to each other,” Lucy says. “There was really an atmosphere of people who just wanted to learn and help other teams do their best in the competition. We have a great team here in Trinity, so we also had a great time camping together for the six days in Silverstone.”

The team was a unanimous standout in the competition’s focus on diversity and equality. Racing Pride partnered with Aston Martin to present Trinity with its Diversity and Inclusion award and a trip to Aston Martin F1. Throughout the year, the team has worked tirelessly to promote and welcome diversity and inclusion to their ranks. A quarter of the team identifies as female, with a further 2.4% as non-binary. As the highest percentage of female trackside staff in F1 stands at 9.8% in Alfa Romeo, Formula Trinity is focused on bridging this gap, starting at College level.

A recent addition to FSUK is FS-AI. It challenges teams to develop artificial intelligence systems for self-driving cars. After a conscientious effort was made by Formula Student to meet the demand for Autonomous cars, Formula Trinity Autonomous refocused in 2020 towards a new direction. This section of the team programs their autonomous driving system into a competition standard ADS-DV (Autonomous Driving System Dedicated Vehicle). As the first Irish FS-AI team, they are steadily growing their base and research to reach level 5 vehicle autonomy. Competitions outside Formula Student helped build their determination and teamwork in the run-up to July.

“Most of us joined the team after competing in the virtual Grand Prix,” Sam Walsh, Head of Autonomous Business Operations, says. “We then went to Prague to compete in F1Tenth which helped build a strong bond within the team, and it played a huge role in our success.”

The Autonomous business presentation team of Daniel Flood, Katherine Hardgrave, Sean Larkin and Sam Walsh picked up the winning trophy for the Real World in AI presentation. They also passed the Autonomous demo, marking the Trinity team as noteworthy recipients of the Allan Staniforth award for Best Newcomer to FSUK.

“I think going forward the team is in great shape and will be viewed at FS-AI next year as a serious contender to win the Dynamic Driving Task.” Sam says.

While the Internal Combustion team achieved a rolling chassis, the loud hum of the car’s Honda CBF600 engine remained silent for the week as the car did not make it past judging standards. However, this was not enough to defeat the team, only spurring them to get the wheels rolling for next year. The team’s main goal is to pass Scrutineering — a rigorous process on the third day of the competition where the car is inspected for rules compliance before being allowed to race in the dynamic events. Only 14 of the 75 Internal Combustion cars completed Scrutineering this year.

“Seeing Betsy (the car) on the Pit Straight at Silverstone is still something that makes me emotional when I think about it,” Adam says. “All the blood, sweat and tears that went into a piece of scrap, you’d be up at 3am wondering what’s the point? It was so surreal.”

“She’s going to be a stunner. Betsy is going to be simple, she won’t have too many shiny bells or whistles — and she’ll have a shorter chassis!” Keith Ahern says.

“I’m personally hoping for a red chassis but haven’t got the lads on board with that just yet.” Lucy smiles.

The team is revving up to next year’s competition and will be looking for new recruits on their Instagram and LinkedIn (@formulatrinity) in the coming weeks. Adam Holmes notes the key trait the group is looking for is passion.

“Passion is the most important factor. You can have all the money and facilities, but if you don’t have that drive and talent to create the spark, you’re at nothing.”

Katelyn Davis is the current Food and Drink Editor and a Junior Sophister in English and History Joint Honours.

A league of its own

While nearly everyone in Ireland has heard of, and probably watched, rugby union before, I’m willing to bet that very few have watched a...

Watty Graham’s Glen has lodged an appeal against the outcome of last Sunday’s All-Ireland Senior Club final, after there were 16 men...

Trinity Meteors are to compete against Killester Basketball Club tomorrow in the hopes of their first national title since...

Training recommenced a few weeks into term, and Club Captain Claire McNamara stressed how impressed she was with the number of fresher...