“In a place like Myrtle Beach, there are just as many churches as there are strip clubs.” Alli Coates muses.

She says this while explaining why she and performing artist Signe Pierce chose the South Carolina beach town as the location for the “experimental video art” which the two originally set out to make. Indeed, there is something anatopistic about Myrtle Beach – it throbs with charming, sleazy, self-assured ostentatiousness while sitting on the doorstep of one of the more socially conservative US States. A preacher can be heard espousing hellfire and brimstone amid all the booze, lights, trash, sugar and strippers. It is here, in this inherently confused setting, that the first jerk of the American Reflexxx was felt.

In 2013, filmmaker Alli Coates and performance artist Signe Pierce arrived at Myrtle Beach to sojourn in Alli’s beach house and, while they were at it, toy with the unique offerings and “suburban aesthetic” of the place. “[In Myrtle Beach] what makes a good upstanding person is such a contradictory thing.” Alli explains as she sits shoulder to shoulder with Signe in their LA home. ” It’s such a radically conservative place.” A far cry from Los Angeles, New York, Miami, or any of the other places in which Coates and Pierce have ensconced themselves in the local art scenes; therein lies its appeal. Signe nods in agreement with Alli, chiming in ” As a performance artist, I was always frustrated about doing a bunch of performances for people [in the art scene] who already understand what I’m trying to say. We were thinking ‘ We need to get outta here, we need to go pop the bubble'”

Enter “Ms Cyborg” (Signe), our main character. American Reflexxx begins with a slow panning shot trailing up her body. We see long, bare legs and almost aggressively large “stripper heels”; we see a body-hugging, low cut blue dress; we see cascading blonde hair; and then, where her face should be, we see a silver mirrored mask which hides Signe’s expression and only shows the reflection of whomever looks upon her. The costume choice initially could strike one as peculiar. “This character is manufactured from the American Dream, the way that she looks and the way that she walks.” Alli tells me. Signe continues. ” In the media, often women are portrayed without a having an identity, and that their entire purpose is just to be a body. [We wanted to see] what would happen if you dropped that girl into the streets.” And so she walks; strutting confidently, dicing between the pedestrians and on-lookers with a block of chrome where a face should be. Occasionally, she stops to lean against a tree and gyrate her hips, or to bend down to the ground. It’s a bizarre mimickry of the porn-ready stripper trope we see purported in advertising, film and television, bizarre because this creature was never intended to roam the streets of her own free will. Behind, Alli follows with a small camera, which “intensified the spectacle” of it all, she admits. The film’s editing is glitchy, the audio at times distorted and artificially protracted. The added digital harshness gives the film an air that I can only describe as cyberapocolyptic; futuristic and fraught with an impending sense of doom.

People quickly begin to address Signe; they give blunt assessments about her body, frequently ask to see her face, proposition her, taunt her and – somewhat unexpectedly – frequently accuse her of being a “shim” or “shemale”

My instincts were correct; the reaction of the people around Signe is extreme to the point of violence, the scale of which neither Signe nor Alli ever anticipated. People quickly begin to address Signe; they give blunt assessments about her body, frequently ask to see her face, proposition her, taunt her and – somewhat unexpectedly – frequently accuse her of being a “shim” or “shemale” (particularly interesting, this having taken place pre-Caitlyn Jenner). Other than the missing face there isn’t much else to point to the character being transgender. Nevertheless, it is the crowd’s immediate instinct to be unsettled by potentially violated gender norms. A following begins; soon Alli and her camera are just “one in the crowd” of iPhone-toting spectators with their devices in front of their eyes capturing the mockery.

” They looked like zombies!” Alli tells me, with an air of retrospective disbelief, in reference to the drove of teens and adults who walked behind Ms Cyborg. “I think this digital culture that we have now makes us feel so detached, even from the realities that we’re living. [These people felt detached] putting it on Instagram or Vine or Twitter or Facebook, but they were just as much a part of the situation by being there.” The pictures and videos these people took have, thus far, never been located online. After the film’s release, people reached out to Pierce and Coates, proclaiming to have witnessed the events. None admitted to being part of the mob. Alli and Signe, however, would be the last people to decry the Internet. “We’re really inspired by The Cyborg Manifesto, the Donna Haraway publication that came out in the 80s about women as cyborgs,” Signe and Alli are both self-proclaimed “cyber-feminists” “[Cyberfeminism] is a futurist concept about women being able to take on a like as post human machines and reclaiming their power through technology.reclaim the importance of their bodies, their minds and their interests through the Internet and through technology.” It further informs their choice of robotic get-up for the video’s main character; with the Internet serving as, in their eyes, a more egalitarian platform. As Alli puts it, “[The internet] creates a level playing field for anyone to voice their opinion and be heard by as many people as possible, whereas in typical society certain voices are valued more than others.”

“I thought ‘I don’t owe that to you, you don’t get to take that piece from me. Just because you don’t understand something doesn’t mean I have to give you a piece of me.'”

Without spoiling the ending – as the short documentary is available on Youtube and certainly worth the watch – the violent crescendo would make you wonder how Pierce and Coates didn’t bring the experiment to an abrupt halt out of fear. ” I figured,” Alli begins ” ‘If Signe wants me to intervene she’ll take off her mask or say something to me.’ She stayed in character throughout the entire experiment, so I just kept rolling…but obviously I was really terrified for both of us throughout.” Signe’s eyes flicker as she casts her mind back to what pushed her to continue, stating with determination ” When [the people in the crowd] pushed me down, they were disarming me in any way they possibly could. There was no way in hell I was giving them the satisfaction of taking the mask off. I thought ‘I don’t owe that to you, you don’t get to take that piece from me. Just because you don’t understand something doesn’t mean I have to give you a piece of me.’ ” The question that hangs is why the people react they way they do to the seemingly innocuous act of a female walking through a crowded area. Alli is reluctant to pinpoint any one reason ” Well, I hate to put a definitive answer on what I think people should take away from this, because what I find the most interesting is whenever someone watches this video, they bring their own social background and baggage to it…It’s an interesting Litmus test for culture, for a person to watch this and the thing they’re most upset about is usually very relevant to them as a person.” Signe, having been the locus of the crowd’s attention, notes mob mentality as a major theme. ” When a big groupthink happens, it is very difficult to break away and be the better person and say “Stop!”. That’s something I want people to take away from this – don’t be afraid to be that bigger person. It’s okay to be the one who raises your voice.” 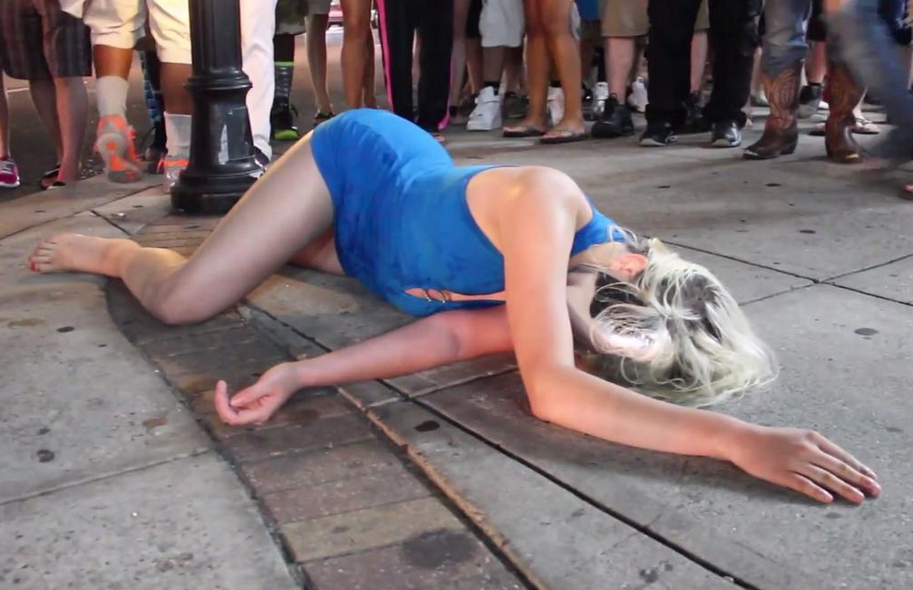 It ends with stark simplicity – a panning shot, soundtracked with the eerily slow rendition of ‘Blurred Lines’ on which the story begins, showing Signe, slumped, perhaps tired, blood congealing on her skin, and Alli’s bubblegum-pink hair reflected in the mask. It’s hard to see, but Coates looks – though still immersed in her filming – pained, worried even. When I discovered the video, it had the guts of 300,000 views – it now sits at a cool 1.4 million. In a sea of viral videos, ‘social experiments’ if you will, attempting to make some overarching point about our society, one may wonder why this one is special. It’s because there’s something deliciously organic about the turn of events – it isn’t structured to demonstrate any one particular truth, nor is the environment controlled. It is a beautiful accident that seemed to awaken an almost primordial instinct laying dormant in a suburban beach town, awakened by the two artists perfect for the job of summoning it forth.

Eva is a former Deputy Editor of Trinity News.

The decline in religion among the younger generation

Ironically, given our history as a nation practically defined by its devout Catholicism, as of 2022, a large majority of young people in...

The culture of constant self-help has experienced a boom in recent years. Exponentially growing during the pandemic, when we had nothing...

In July of this year, the government announced that the Metrolink, a “high-capacity, high-frequency rail line running from Swords to...

Christmas can be an expensive time of year — from buying presents for family to Kris Kindle with work colleagues and a general increase...

Northern Ireland set for another year with no local government: But how did we get here?

Since the Good Friday Agreement in April 1998, Northern Ireland has been led by a power-sharing executive that demands cooperation from...