Macron was welcomed by Provost Linda Doyle and joined by the Taoiseach, Minister Simon Harris and Lord Mayor Alison Gilliland

He toured the campus and met with students and staff to discuss topics such as post-Cocvid Europe, climate change and digital equality.

He was joined by Taoiseach Micheal Martin; Minister for Further and Higher Education Simon Harris; and Lord Mayor of Dublin Alison Gilliland. Provost Linda Doyle welcomed the French president and led the group through a tour of campus. 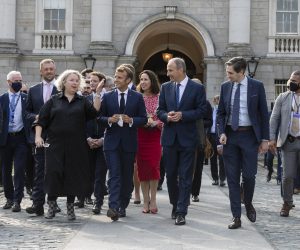 At the Old Library, Librarian Helon Shenton showed the president around the Long Room, where he viewed the Book of Kells and the Library’s collection of 347 Samuel Beckett letters.

Addressing the president and assembled guests, the Provost said: “I am delighted to welcome President Macron to Trinity for a visit that gives us a chance to celebrate our abundant connections with his country. France is the most popular destination for Trinity’s Erasmus students, and we currently have exchange agreements with 42 French institutions.”

She continued: “It is wonderful that our students have had the opportunity to discuss with President Macron some of the most important challenges we all face.”

College is also member of the League of European Research Universities (LERU) along with three French universities; Sorbonne University, Université Paris-Saclay, and the University of Strasbourg.

According to the Provost, College collaborated with 266 French institutions and co-authored more than 1,100 co-publications between 2016 and 2020. College is also home to the oldest chair of French in the world, the alumni of which includes writers Samuel Beckett and Oscar Wilde.

Bella Salerno is currently a Deputy News Editor of Trinity News. She is a Senior Fresh Middle Eastern, Jewish and Islamic Civilisations and French student.

Trinity Ball to be held on April 22 next year

€3.7 billion allocated to students, universities and young people in Budget 2022

More than €17 million has been announced in support for struggling third-level students as part of the Student Assistance Fund. An...