The demo, organised by United Against Racism, advocated the opening of safe routes for asylum seekers

The rally was organised by United Against Racism (UAR) and was part of an island-wide day of action on the issue. Concurrent demonstrations in Belfast and Sligo were also held by UAR.

In a statement on social media, the organisation wrote that: “The Irish government and state has a clear moral obligation to accept Afghan refugees after the catastrophic fall of Kabul. This is particularly the case in view of Ireland’s complicity in the disastrous twenty year US war in Afghanistan by means of the Shannon war port…Ireland has allowed the US military to use Shannon as a staging post for its troops and planes.”

The statement went on: “It is utterly unacceptable that [the government] should now refuse to accept refugees…or that it should only accept a paltry number such as the proposed figure of 195. Setting such a low figure is simply a concession to the false arguments of the racist right.” 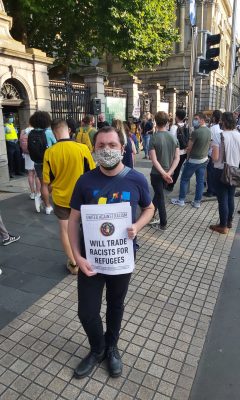 Trinity News contacted Trinity College Dublin Students’ Union (TCDSU) to ask whether they were endorsing the rally, but received no response at the time of publication. The union has endorsed previous UAR demonstrations.

Speaking at the rally, Paul Murphy, TD for People Before Profit, said that: “A substantial majority of people say that 200 refugees that the Irish government is taking in is disgracefully low.”

A recent poll conducted by Ireland Thinks and the Mail on Sunday found that 55% of Irish people think the country should accept more than the planned 195 refugees.

Mick Barry, TD for Solidarity, also spoke, saying: “We need to let refugees in, we need to abolish the direct provision system.”

An onlooker then attempted to disrupt the protest, shouting “what about our own homeless”. John Molyneux, a member of UAR countered the heckler in his speech, saying “once you give grounds to racism, you will destroy every progressive campaign” and expressed a need to adopt an anti-racist approach in campaigns for workers’ rights and housing rights.

“If we give an inch to racism, we will create a society that none of us want to live in…it’s in our interests here in Ireland to say ‘refugees are welcome here.'”

Aoife, a campaigner and volunteer on issues of homelessness, echoed this sentiment in her speech: “I work on the ground with the homeless community…I have a firsthand knowledge of how racist those systems are, but not once have I seen someone being housed first because of the colour of their skin.”

Úna Ní Riada, a representative of the anti-far-right umbrella group Le Chéile, spoke about vacant housing and how it could be usurped to house refugees: “I identified 24 empty houses on the road between here and Mayo. These could be refurbished, people could be living in them… Afghan people could be really welcome.”

She offered to hand out Ordnance Survey maps to attendees of the rally, to be used to map vacant housing in their area

Attendees wore masks during the event and chanted slogans including “we stand with Afghani women” and “Micheál Martin, hear us clear, refugees are welcome here.”

UCDSU campaigns officer Darryl Horan was in attendance representing the organisation. Speaking to Trinity News, Horan said: “Currently the government plans on accepting only 230 Afghan refugees. This is a token gesture when what the Afghan people need is real action. UCDSU and number of organisations like Le Chéile are calling for at least 1000 refugees to be offered asylum.

“Ireland has shamefully supported US aeroplanes on their way to Afghanistan attacking, in many cases, Afghan civilians. It is time we acknowledge our role and offer Afghans refuge. Lastly, the government must take serious its moral responsibility and when these refugees arrive in Ireland it must implement the recommendations of the Day Report, ending direct provision.”

The protest was called following the Taliban’s seizure of Kabul on August 14 and subsequent de facto takeover of Afghanistan, and the ongoing crisis that has seen many Afghans seek evacuation from the country.

300 Afghan citizens are expected to arrive in Ireland in the coming weeks under refugee and family reunification programmes, RTE has reported. 150 humanitarian visas were announced on 18 August under the Irish Refugee Protection Programme.

Nick Henderson, CEO of the IRC, has called on the Irish government to commit to accepting a minimum of one thousand Afghan refugees.

This article was updated at 7:30pm, 26 August, to add commentary from UCDSU.

Grace Gageby is the current Assistant Editor of Trinity News. She studies English and Philosophy and was previously Deputy Comment Editor.

Ireland has been ranked third among the 38 member countries of the Organisation for Economic Co-operation and Development (OECD) for rate...

TCDSU to hold vigil for Mahsa Amani outside Exam Hall

Trinity College Dublin Students’ Union (TCDSU) will this evening hold a vigil in memory of Mahsa Amini alongside the Society for...

The Irish Universities Association (IUA) has said that the measures to address the funding gap in higher education included in Budget 2023...

Students have reported being left standing or sitting on the steps of lecture halls due to overcrowding of rooms. First year students...

The Union of Students in Ireland (USI) has responded to reductions in college fees in Budget 2023.    USI has criticised the...