Summer has turned Dublin into a concert playground. The last few weekends, my Instagram feed has been filled with videos of the latest gigs. I attended the Picture This gig at Malahide Castle on June 18, along with Grammy winner Olivia Rodrigo’s performance on June 30 at Fairview Park. Both shows were amazing — and it is important to keep in mind that the concert experience is not just about the artist, it is about the choice of venue too. Malahide Castle and Fairview Park are just two examples of Dublin’s parks that have been transformed into concert venues this summer. Due to the increasing popularity of outdoor venues, we must examine the outdoor concert experience. Is it in line with the typical experience of purpose-built indoor venues?

Malahide and Fairview Park both offer two different kinds of outdoor concert experiences. Malahide has a greater festival feel with dozens of food and drink stands. It feels like a mini version of Longitude, which is held at Marlay Park every summer. Malahide’s setup is spacious with room to sit away from the throngs of people. From both personal experience and social media reports of other concerts at the venue, there doesn’t seem to be a big queuing culture at force. This enables one to show up after the gates open and still have a good view of the stage. I didn’t show up till an hour after gates opened, and only moved closer to the stage at the end of the final support act. This was my view. 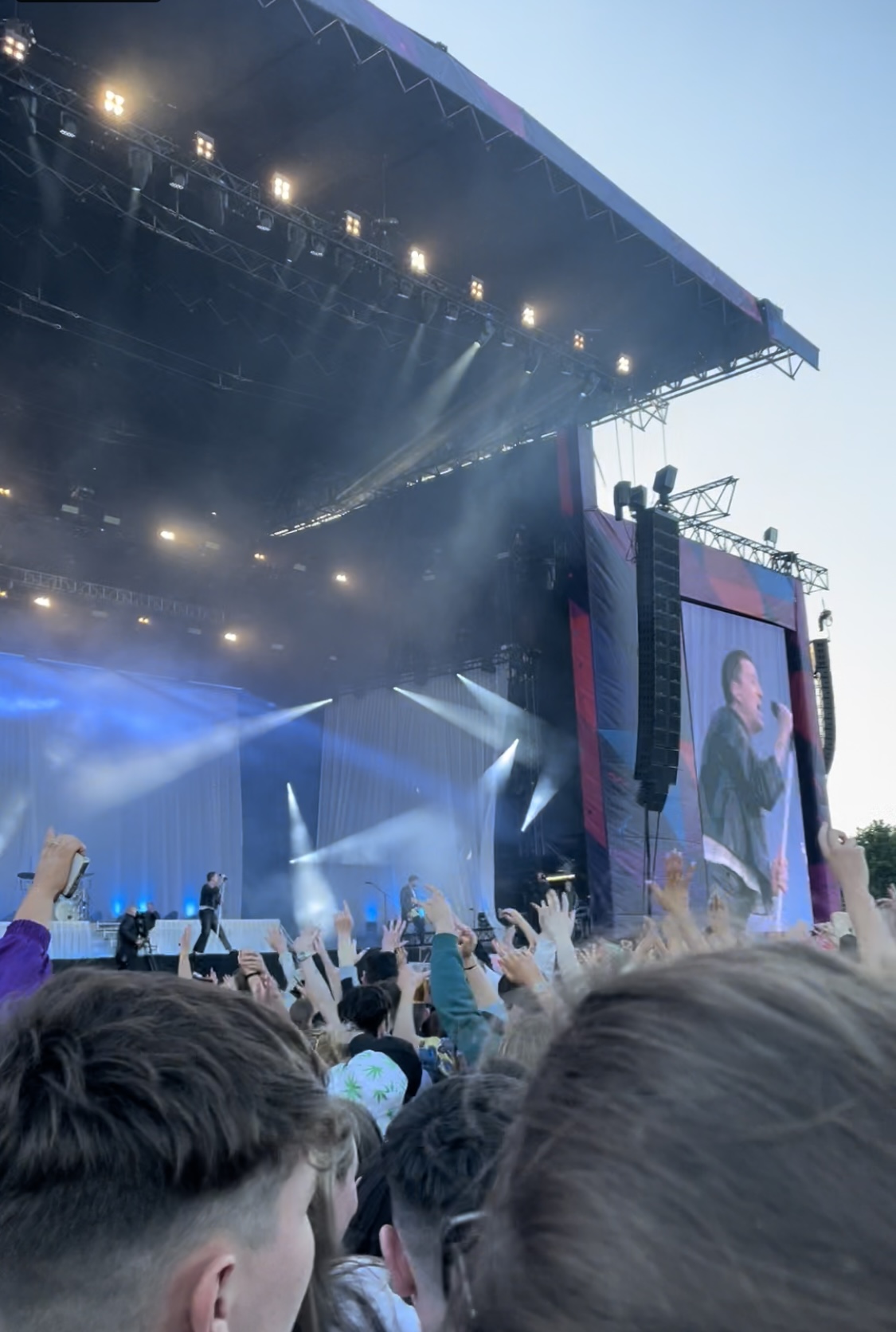 In line with the festival feel, people are actively travelling to and from the food and drink stands. This includes those standing near the front of the stage. People are often sitting on each other’s shoulders, creating an atmosphere that feels nothing less than electric. One becomes induced into thinking they are at an actual festival, rather than a place they usually bring their dog to for a quiet walk on a Sunday morning.

However, one problem that arises from the bustling crowd is the accompanying consistent pushing and movement. Obstruction of view is a problem too. The big screens hoisted on the stage essentially provide a solution, although looking at them for the duration of the concert cannot be traded for the feeling of seeing the artist in the flesh. We are used to watching these artists on our phones and on television, so one could ask, what is the purpose of attending a concert if you are just staring at the screen the whole time? In this regard, if your favourite artist performs at Malahide, it may not be the ultimate experience.

A more intimate setting is expected at Fairview Park, with the capacity to host around 5 thousand people. It could be classified as the outdoor alternative to an intimate gig. However, if one compares the setting of Fairview to the intimate indoor setting of the Olympia theatre, the Olympia is still the better choice. The way the latter is structured means that a view of the stage can be seen from any section of the theatre. I can vouch for this after having had back-row seats for Conan Gray last May. Regardless of my seats, I still had a clear view of the stage. However, Fairview park is not structured this way.

Fairview’s venue is set in an enclosed tent. Strolling up to the venue after gates open provides little chance to get a clear view of the stage unless height is not an issue for you. There were screens set up at the side of the stage for Olivia, however this was not the case for every artist that performed here. I queued up five hours before the gates opened to ensure that I would have a good view. Around a hundred people were already in line before me, with some queuing as early as 6am. This was the view I ended up with.

The queueing process was chaotic, with a lot of stress and confusion among concertgoers. It felt very disorganised and there was little communication about what was going on. Once gates eventually opened, it became apparent that the venue was too enclosed for many. Countless people were carried out before and during the show. For someone used to standing in enclosed spaces at concerts numerous times over the last few years, even I felt faint. Calls of help were passed up to security from the middle of the crowd. Praise must be given to the security here for their efficiency in helping people in need of assistance. Water was continuously passed on and awareness was spread to ensure everyone had enough space in the crowd.

Outdoor concert venues can have their advantages. Depending on the choice of location, it can be an experience that one will share with tens of thousands of other people. It can give the impression of being at one of the large festivals in mainland Europe instead of your local Dublin park. In this regard, it can be very immersive. However, it is sometimes lacking in amenities that indoor venues champion. Purpose-built venues guarantee more in terms of safety, views and even the freedom of the stage production. Outdoor venues do not host shows on a regular basis, while indoor venues holding concerts 12 months a year boast a greater experience. In truth though, everything is based on what you are seeking out of a concert experience. If you feed off the adrenaline of a crowd rather than the artist themselves, then the outdoor scene may be the better option for you. Especially, if the Irish weather is on your side, sometimes there can be nothing more special than the conjoining of a crowd at an outdoor concert.

College life provides a unique set of experiences and emotions. You’re often halfway through an experience before realising this is...

After an excruciating, but somewhat thrilling, third day of my first year of college, I planned on spending the evening binge-watching a...

It is clear that exam season is upon us when the library begins to fill up at 9am. At this time of year, a can of Monster opening echoing...

A letter to first-year law students

No. The rumours you’ve heard aren’t true. Law isn’t an impossibly strenuous and boring course. As the building block of society, it...

People tend to underestimate the power of a cosy space when, in reality, the state of the apartment often goes hand in hand with the state...